In a crosswind landing, there are two specific techniques that can be used. The crab technique and slide slip technique are the options. How & when should you use them?

Wouldn’t it be nice if all landings were “normal?” Normal, as defined in the FAA’s Airplane Flying Handbook is “when engine power is available, the wind is light, or the final approach is made directly into the wind, the final approach path has no obstacles and the landing surface is firm and of ample length to gradually bring the airplane to a stop”

Ahhhhhh, sounds lovely doesn’t it? Well the reality is that “normal” is not the norm. Crosswind landings are a part of life. As aviators we need to be able to adapt rapidly to our ever changing environments.

CAUTION: Crosswind Landings Can Cost You Your Life

Almost all landings are made with some sort of crosswind component. Sure, every now and then we get lucky enough for that wind-sock to be pointing directly towards us on final approach when the winds are howling, but it’s not typical. It’s usually cocked over to one side or the other…at least a little. Or if we’re “”lucky”” enough, it’s swinging around, changing directions! Talk about fun! 😕 Put simply, you need to be on your “A game” when there’s a stiff crosswind!

That’s not to say EVERY landing shouldn’t be treated with respect, because it certainly should. But when the winds are calm, we’re not thrown the same set of challenges we are when that wind sock is restless.

With that said, there are two techniques that you can use during crosswind landings: the crab and the side slip. 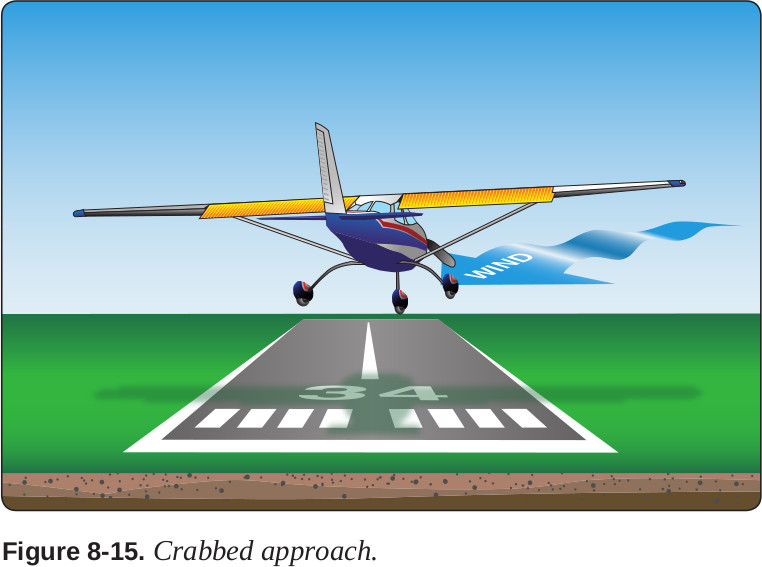 It is no different then crabbing into the wind while on a cross-country flight to maintain a certain flight path over the ground. You simply turn the aircraft, by using ailerons, into the wind, maintaining coordinated flight.

The necessary crab angle is determined by the strength of the crosswind component during the approach to land. Whatever keeps you aligned with the extended runway centerline is the angle you should use. The stronger the crosswind, the higher the crab angle necessary.

The side slip or “low wing” technique is used by lowering the upwind wing (the wing on the side where the wind is coming from) with aileron, while applying opposite rudder to maintain alignment with the runway centerline. The wing is lowered to prevent drift across the runway, and rudder is used to maintain a heading aligned with the direction you are landing. 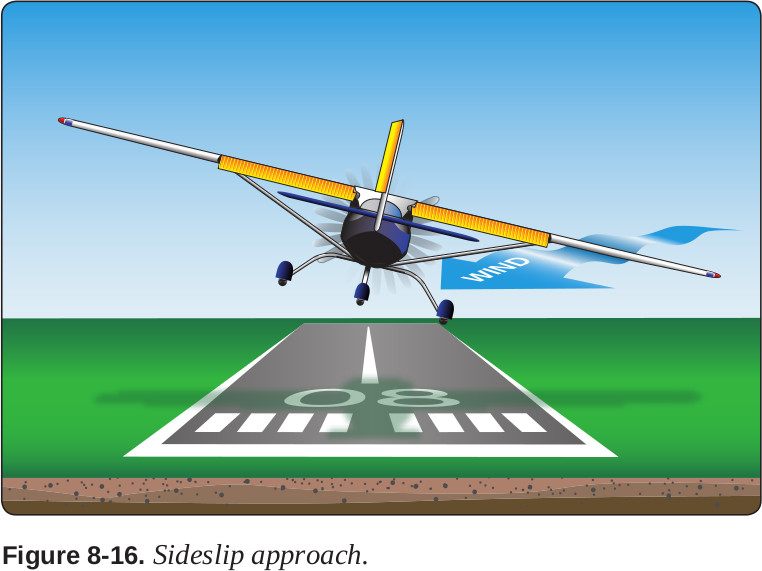 The stronger the crosswind component, the more the wing will need to be lowered. However, lowering the wing will create the tendency for the aircraft to change heading (away from the direction you are landing). Rudder is used to combat this, creating the uncoordinated slip into the wind.

While we are on the subjects of slips, let’s clarify one thing…the difference between a side and forward slip.

When I was first learning how to fly, I was confused by the wording of a “side slip” to a landing. I thought slips were only something we used when we needed to drop a lot of altitude in a hurry. Especially while we were on final approach to land and were coming in too high.

That is a “forward slip,” not a side slip. See the Airplane Flying Handbook for a definition and differences between the forward and side slips. 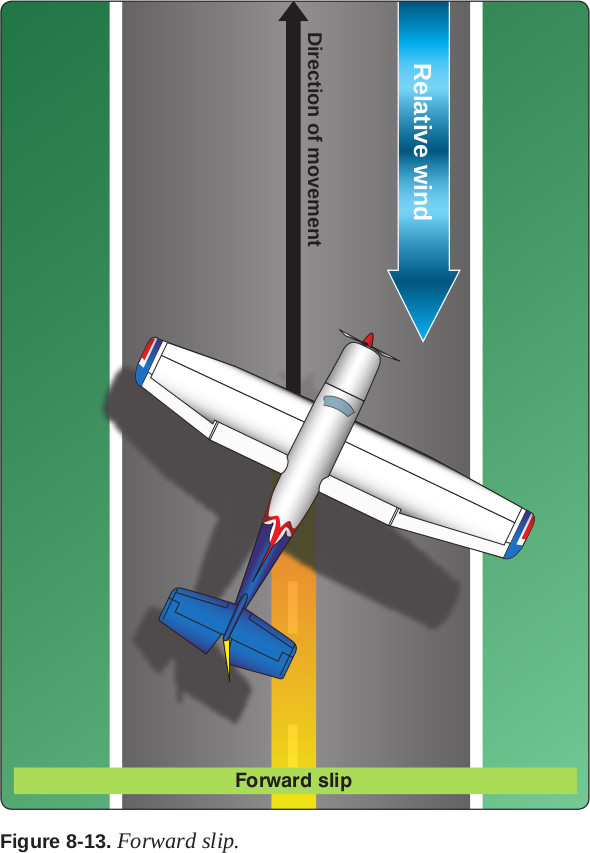 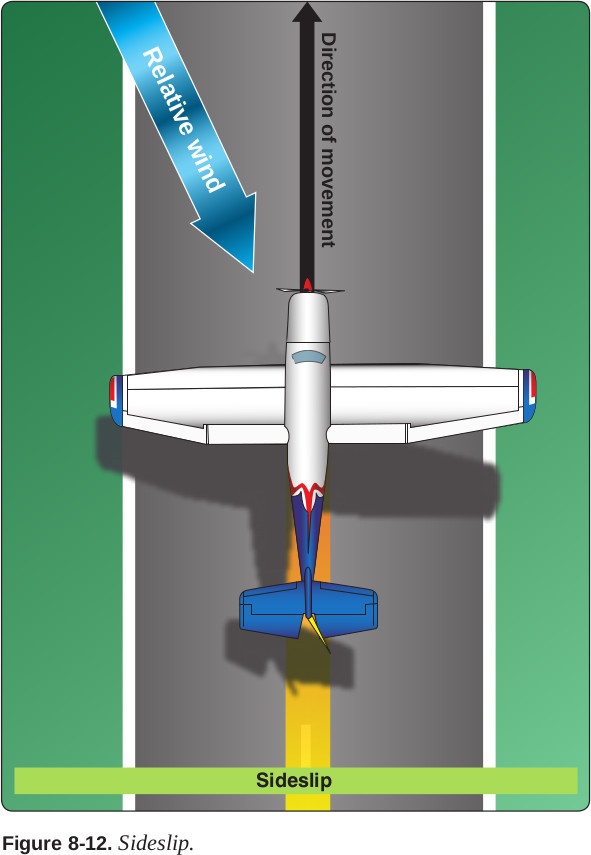 Which Technique Should You Use? The Verdict

The question then becomes “do I use the crab or slip technique?” The short answer is a combination of the two. Now for the long answer.

The general rule of thumb is to use the crab method on final approach, and transition to the slip/wing-low method for touchdown. This is the approach my instructor taught me, and it’s the one the FAA recommends in the Airplane Flying Handbook.

Using the crab method is especially effective for long final approaches where heading is not as important as ground track. However, it is imperative to transition to the side slip technique at some point before touchdown to prevent the landing gear from getting damaged due to side loading.

The way my instructor taught me, and the way I would recommend is to use the crab technique on final approach, then transition to the slip technique when you are comfortable. The timing and altitude of this transition is strictly a personal preference for each pilot and will depend on environmental conditions and comfort level.

Once established in the slip technique, you should be able to touchdown with the nose and wheels of the aircraft facing the direction of the runway centerline. If using proper technique, and the crosswind component is strong enough, you may touch down on one wheel first. This is normal, and actually, textbook technique.

Transitioning To The Rollout and Taxi

Right before all wheels touch down, there are some critical things to remember. The challenge is to perform a nuanced transition to ground operations after touchdown. Make no mistake…this is not easy and will take practice and repetition, but you will get there!

First, if your aircraft has nosewheel steering interconnected to the rudder pedals (most Cessnas), make sure to center the nosewheel with the rudder pedals just before the wheel hits the ground. If you don’t you could start veering off the runway centerline.

Next, make sure you continue to gradually increase aileron deflection into the wind until you reach the limit of the deflection. This means that once you are slowed down, you will have your stick or yoke fully turned into the wind. Make sure this is done gradually and not sudden. The flight controls will become less effective as you slow down.

Here are a few more tips of my own.

To answer the question of whether to use the crab or slip technique, the answer is both. Crab into the wind on your approach and descent, then transition to the slip technique to align your aircraft with the runway, and avoid damaging your landing gear from side loading. The longitudinal axis must be aligned with the runway centerline before touchdown. Don’t forget to apply proper control inputs for rollout and taxiing.

What about you? When do you transition to the slip? What altitude? Thanks for reading, and be safe!

How To Avoid Motion Sickness As A Student Pilot

The FAA’s Definition of Night – Explained